Have you ever wondered where those large drips on antique pots such as this come from?

I was crawling around in Sid Luck's kiln the other day and grabbed my camera to take a few photos of the origins of kiln drips. What you are seeing in these photos is a combination of the build up of ash and salt on the interior arch of the kiln, and in some part a degredation of the brick from the ash and salt. Older kilns which did not necessarily have hard brick or soft brick and just used locally made brick broke down faster. Sid was saying this past weekend that his ancestors' kilns were fired until they collapsed in because they were made from local brick. 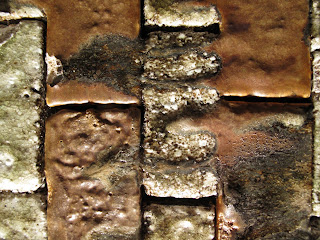 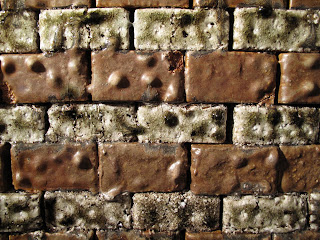 Kiln drips may also come from glazes of other pots, such as this drip on one of my pots when it was fired in Joseph Sand's kiln.
Historically though, pots were generally only glazed on the interior (if they were glazed at all) until industrialized potteries started glazing the interior and the exterior. And I should say I am referring to stoneware, not earthenware, because that is a whole different ballgame!
And even when the pots were glazed on the outside, sometimes the kiln still got the best of the pot. For example, this alkaline-glazed Meaders piece in the collection of Steve Ferrell in Edgefield, South Carolina has a huge chunk of kiln which fell from the ceiling during the firing, slid down the side of the pot and adhered itself to the base. The fluke of this piece is probably what kept it from getting broken all of these years!

Posted by Liberty Stoneware at 9:47 AM

How interesting and so cool to learn of this, love the jug with the brick piece attached and the drips too. I'll keep an eye out in antique stores for these now.

Other Blogs of Interest