One of the best things that followed me home from Kentucky recently was an amazing piece from a kiln. I say followed me home, but I was in fact, graciously given this piece and I am incredibly excited to share it with you.


Not just any ol' blob from a kiln though! This particular blob has a huge mass of smoking pipe heads all lumped together! The image above is really great because you can see how the pipes were made in a two part mold. The thin little line that runs down the center was the space between the two molds when the pipes were put together. There are about four different pipe designs, which is pretty neat to think of four molds being used in one shop. 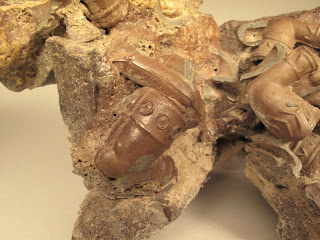 I suspect that these were being fired in a salt-glaze kiln before they met their demise in the bottom of the kiln. The provenance behind the piece is that it is from Ohio. If anyone has ever seen any of these types of pipe heads, I would love to know more about where they may be from and what time period they may date to.
Why do I suspect this little beast came from a salt-glaze kiln? 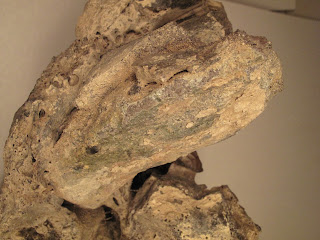 The center blob above- light gray, with a sanded surface and a light greenish coating - is a piece of kiln furniture used in a salt-glaze kiln. 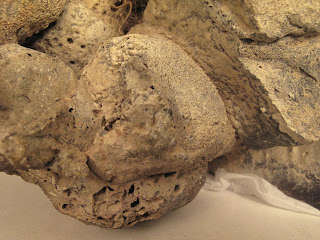 The center piece in the photo above is also a piece of kiln furniture from a salt-glaze kiln. 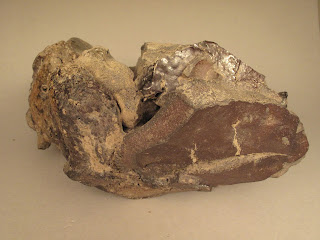 I think the pipe heads met their demise when the saggar that the pipes were fired in may have collapsed. In the photo above the piece at the bottom right is a large section of what may have been the saggar. This is another reason I think this was a salt firing kiln, because everything turned into a massive stuck blob because of the salt that fused everything together.

Posted by Liberty Stoneware at 9:13 PM

This pipe type is late 19th century, possibly even made into the early 20th century. Similar pipes like this were made in the Akron, Ohio, area and also at Point Pleasant, Ohio (on the Ohio River). I have seen other deformed examples like this from Point Pleasant and suspect that is where this specimen is from.

Other Blogs of Interest